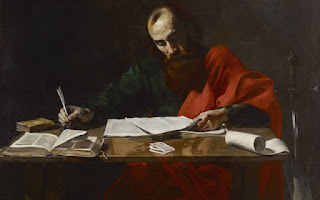 Side note: This post was originally a social media rant. I pasted it as is, with negligible editing

The jury is still out on whether or not Paul was a legit apostle. Here are 3 major reasons why.

The contradictory account of Paul's conversion (Acts 9, 22 and 26) is told only from his perspective. In fact, the whole of the Acts of the Apostles was written by Luke, Paul's PA who supposedly travelled everywhere with him. The book is essentially a PR campaign for Paul (to prove his apostleship). If you read it objectively, it should have been called Acts of Paul.


The body of work fallacy

Because Paul is featured in like 2/3 of the New Testament, people assume he "did the most work for the Gospel". But the simple fact is that most of the original 12 who walked with Jesus couldn't read and write. So it's only natural that Paul wrote more literature. It doesn't mean the original 12 did less.

Add that to the fact that those who compiled the Bible (yes, compiled, it didn't fall from heaven) had a preference for Paul's writings (dude is eloquent) and hence featured it more. This explains why much of modern Christian doctrine is evidently Pauline.


Disagreement with the original 12

The original 12 seemed to disagree with Paul a lot. In Galatians 2:11–2:14, Paul himself alludes to him and James (brother of Jesus) not seeing eye to eye. Notice how Peter, in this passage, is trying to do 'oju aye' and play to both sides?

There are more clues. In James 2:14-24, James himself is seen to be subbing Paul (Romans 4). Also, Peter admits to not understanding Paul's teaching (2 Peter 3:16). There are many other tiny references.

So when people say Paul did more work towards the advancement of Christianity than the original Apostles of Jesus, I can't help but wonder if this is true.

I mean, the bulk of what we refer to as 'The New Testament' was directly or indirectly written by Paul, including one of the Synoptic Gospels written by Luke, who like Paul, never walked with Jesus.

Is it safe to say that popular perspective of the early church has been shaped by a single story and, thus, isn't necessarily all-encompassing?

PS: I have assumed, for the sake of simplicity and the scope of this article, that every Epistle is attributed to its genuine author. More on this in later editions of my Bible School series
Labels: Bible School Faith